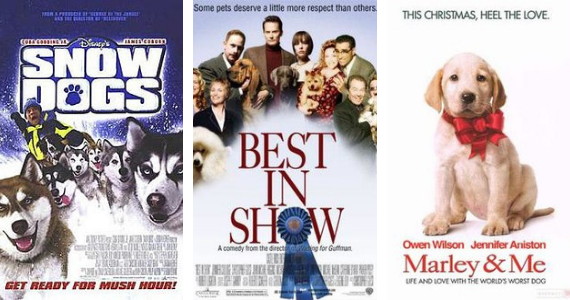 We all know that our pet dogs can be funny, so grab your popcorn and feast your eyes on our list of dog films. These are the 15 best comedy dog movies ever! (In no particular order)

Five dog owners’ head to a dog show. A film crew interviews them as they get ready for their trip and as they arrive at the hotel for the competition. The dog owners include a gentleman in a wheelchair and his curvaceous wife, a lady who keeps bumping into ex-partners, a gentleman who dreams of being a ventriloquist and two gay men. The show manages to bring out the best of all the dog owners.

A pair of newlyweds move to Florida after their wedding. To put a hold on having children, the husband buys his wife a puppy. This puppy soon grows into a rather large dog, but doesn’t lose any of his puppy behavior! The dog’s antics give the owner plenty of material for his newspaper column. Eventually, the couple has children of their own yet the dog still tries and tests everyone’s patience.

A dentist has to travel to Alaska to claim his inheritance when his mother passes away. Expecting a hefty sum, he’s left rather disappointed as he receives his mum’s property and a pack of dogs. The dog seems to have a dislike for the dentist but he decides to keep them so he can race them in the Arctic Challenge, a local race. The film revolves around the dentist trying to look after and train the dogs.

Based in California, this film revolves around the lives of five different people and their pet dogs. When the paths between the humans and the dogs collide, the lives of these people change in a way they would have never predicted.

A funny comedy about three has-beens who leave their hometown in debt. Their new journey next involves drinking, women, and greyhounds.

The story of a quiet boy who struggles to make friends. On his ninth birthday, he receives a puppy. He names the dog Skip and the dog becomes well known and fulfills the boy’s life as he grows into adulthood.

Marmaduke is a film about a Great Dane and his family that move to a suburb in California. Based in Orange County, this loveable dog has a tendency to cause lots of havoc. Marmaduke struggles to come to terms with his new home as he has trouble with his new friends and he even has a romantic interlude with another dog. He starts to realize that a large, teenage dog doesn’t always have it the easiest.

Beethoven is a story about a dog that fills a hole in a family home. Beethoven arrives at his new home as a small puppy and fills the family with lots of joy until he grows into a huge dog and starts to cause mayhem.

The saga continues in Beethoven 2 as Beethoven becomes a father. However, the mother in the home wants to use his puppies as a divorce bargaining tool. The kids in the family end up stealing the dogs and try to reunite them with their family. Will the rescue attempt succeed?

Hotel for dogs is a story about dogs that were forbidden at a hotel. However, one of the dogs is adorable and is cared for secretly at the hotel. On his discovery, he is sheltered in a family hotel, which is eventually turned into a luxury hotel for dogs.

This is the ideal Christmas movie for all the family. The story is based around Luce Lockhart who has to take a job walking a rich developer’s dog. She then discovers that the local park is going to be built into a salon and spa, which is going to affect the dog walking area. However, upon meeting Dean, who is irritating but handsome she has a change of heart when she realized he is also against the salon/spa.

Schoolteacher Sarah Nolan has been divorced for eight months but is still grieving at the end of her marriage. She did not see her marriage coming to an end although she would admit it was not perfect. She would have stuck with it if it wasn’t for her ex-partner Kevin, who left her for a younger woman. She’s urged by her family to get back on the dating scene so she sets up a dating site to see what happens. Sarah now has a whole new perspective on dating.

Scott Turner leaves the local police department before moving on to a big city to get experience with some real cases. A murder case begins upon his arrival and a dog, Hooch, is the only witness. So Scott takes care of the dog, as there is a risk he may be put to sleep if he ends up in the wrong hands.

This film is a comedy whereby a man who lives a relatively normal life but has the ability to sometimes turn into a sheepdog.

The story is based around a girl named Opal who has to move to a new home, but it is a trailer park. She doesn’t have any friends and her dad is very busy. Struggling to settle in her dad advises her to go to Winn-Dixie to get some food, but on her arrival, she discovers something is amiss. The other customers are chasing something around. Opal discovers it’s a dog and names her Winn-Dixie. She has to go back to her father to ask if she can keep the dog and her dad agrees. She has an up and down relationship with Winn-Dixie and almost loses her. Opal soon has lots of friends but she soon realizes that she can’t hold on to those that don’t want to be held on to.

I love being a pet sitter but our family also love movies. If we forgot one or you think our ratings should change leave a comment below.